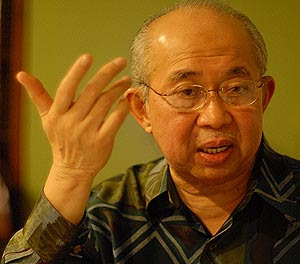 He said the new hospital, costing almost RM100 million, deserved to have specialist doctors in various fields as patients in critical condition had to be referred to the Kuala Krai Hospital (HKK) or the Hospital Raja Perempuan Zainab II (HRPZ-II) in Kota Baharu which were further away.

"My earlier proposal to build the biggest hospital in Hulu Kelantan with an estimated cost of RM250 million had been rejected," he said at a mass circumcision for the Gua Musang Parliamentary constituency, here Sunday.

Tengku Razaleigh, who is also the Gua Musang Umno division head, regretted that his suggestion to turn the hospital as the biggest in Hulu Kelantan and manned by specialist doctors had not been considered by the government.

He said the district hospital, which would begin operation in February next year, would replace the existing one which lacked proper facilities and could not cater to the needs of the increasing number of patients.

He said many critical patients had to be referred to either the Kuala Krai Hospital(HKK) or Hospital Raja Perempuan Zainab II (HRPZ-II) Kota Baharu, which would involve a longer journey. The distance between Gua Musang and Kota Baharu is almost 200 kilometres.

"Similarly, for those involved in road accidents, many of the victims who suffered serious injuries had to be referred to these hospitals to the extent that some of them died along the way.