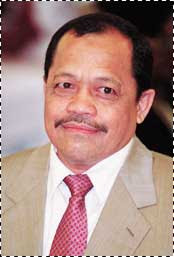 Shahidan, who is the State Assemblyman for Tambun Tulang, made the offer when participating in the debate supporting the motion for the 2010 Perlis Budget Estimates at the State Assembly sitting, here Wednesday.

He said his offer was sincere to ensure that the programme, which was introduced during his tenure as menteri besar, could be revived as it had a positive impact on the Muslims.

He said he was offering his pension and allowance after he knew that the state government could not undertake the programme due to the lack of funds.
Disediakan oleh Zabidi Hj Saidi - @ 4:07 PTG
Label: pension, shahidan
Catatan Terbaru Catatan Lama Laman utama
Langgan: Catatan (Atom)