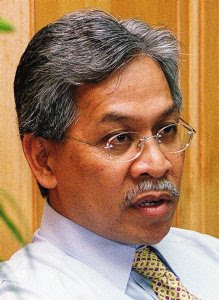 AHMAD SAID WILL BE REPLACED? 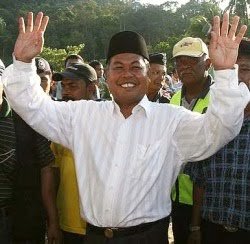 There is intense speculation in Terengganu that the leadership issue in the state will be resolved soon.

WHEN Terengganu Mentri Besar Datuk Ahmad Said returned from an overseas trip last Friday, he was pleased to see a group at the airport waiting to welcome him. But little did he realise that he was arriving smack in the face of an intense SMS campaign against him.

SMS attacks are not new to him. He has been under some sort of pressure or another from the day he took over as Mentri Besar.
Different strokes: Idris’ (left) ideas worked well for his reputation and that of the people of Terengganu as compared to Ahmad’s laid-back uncharismatic approaches.

But this one was a long essay questioning his latest travels, slamming it as a waste of state funds and claiming that he had gone to Munich to discuss moves to replace him as Mentri Besar with the King who is also the Sultan of Terengganu.

The sensational allegations have been the talk of local politicians over the last week.

Ahmad, accompanied by his wife and private secretary, had spent two weeks abroad, first in Munich, Germany, where the King had gone for medical treatment, and then in Mecca to perform the umrah.

He has since said he called on the King in Munich. Sources from the state government also confirmed he had gone to Mecca where he performed the umrah with His Majesty.

“He is cool about it, he is not affected. They’ve been saying he will be out by March, it’s now March and he is still in office. This type of tactics will go on forever. It can only end when politicians have pure-white hearts,” said Rosli Zakaria, the Mentri Besar’s press aide.

Ahmad, as everyone knows, was not Umno’s choice for Mentri Besar. He moved up because the then Mentri Besar Datuk Seri Idris Jusoh fell from grace with the Palace.

In the beginning, there were many who were sympathetic and wanted to give him a chance to prove himself.

But he will mark his second anniversary as Mentri Besar in March, and it is clear by now that the state has slipped back into being a sleepy hollow after the fast-track years under Idris.

Idris upgraded the airport, built a new stadium (although the roof collapsed), put in a new highway and jazzed up the waterfront into a tourism spot.

Ahmad’s style is welfare-oriented quite alienated from the forward-looking vision of Prime Minister Datuk Seri Najib Tun Razak. His approach works for some people but is out of sync with the demands of the modern state.

“Things are stagnant. Nothing is happening in terms of development and people are demoralised,” said a former state official.

Idris won admirers and made enemies during his brief time in office but they agree he was focused, had ideas and knew how to implement those ideas.

Ahmad’s administration does not compare well with that of his predecessor.

On top of that, his administrative style has been at odds with the Federal Government, such as his defiant stand regarding the oil royalty or wang ehsan issue and his insistence on purchasing Mercedes Benz cars for official use instead of the standard Proton Perdana.

He also raised eyebrows for promoting his former senior private secretary to deputy state secretary, which was equivalent to a triple jump in the civil service.

His main drawback is his inability to command the respect and support of his own assemblymen. At least 10 of them — labelled “Sepuluh Budak Hitam” or the 10 black sheep — are still not with him.

They have humiliated him at state legislative assembly sittings by not turning up or boycotting the debate. Even his support among the powerful division warlords is said to be shaky.

Ahmad’s supporters say he still enjoys the confidence of the Palace. But the Palace’s concern is the interest of the people and the state. Palace officials have been taking note of Ahmad’s delivery record in the last two years.

Putrajaya’s chief concern is that if things are allowed to continue, people may take matters into their own hands at the next general election. The prospect of Barisan Nasional losing Terengganu is quite real because the state has a powerful Opposition.

Speculation about Ahmad being replaced is not new. There were two false alarms last year.

But the current round of speculation seems to have a new urgency, and some are convinced the issue will be resolved very soon.

Even the man himself seemed quite rattled because when asked by reporters, he told them; “I don’t know, why don’t you ask the people who are saying it?”

The answer is still blowing in the wind.