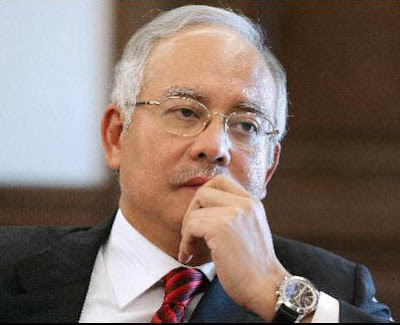 Like his genial, people-friendly father, Najib is concerned about the welfare of the people, hence he came up with the idea of "1Malaysia, People First, Performance Now" as a vital part of his administration policy.

In less than a month after becoming prime minister, he introduced a work culture that includes walkabouts, with him leading the way by walking about in KL's Chinatown or Petaling Street, the Malay-majority area of Pantai Dalam and Indian-majority area of Brickfields, to find out the needs and problems of the grassroots.

In adopting the going-to-the-ground approach, Najib must have been inspired by the experiences of his late father who as the country's second prime minister, had trudged through padi fields and ventured into remote villages and far-flung land schemes where in some instances the latter had to cycle or take a boat ride to meet the people.

As the new prime minister, Najib surveyed the public transport system in the federal capital by taking a ride in an LRT (Light Rail Transit) coach and visited the Puduraya bus terminal to know the problems faced by commuters.

Najib also wanted senior government officials to also go to the ground from time to time to understand the problems faced by their respective customers or service users.

His 1Malaysia concept is aimed at strengthening racial unity in the country based on mutual trust and respect.

Towards this end, Najib stated that he would cooperate with all, including political parties outside the Barisan Nasional (BN).

Najib is so serious about forging unity among the people that he himself launched the new party, Makkal Sakti, for the Indian community to be united under his premiership.

He then set the Key Performance Index (KPI) for the government's administration machinery, besides outlining the National Key Result Areas (NKRA) in an effort to reduce crime and fight corruption, among others.

Less than a year as prime minister, Najib was seen as being courageous to make important decisions in the interests of the people.

For example, Kelantan although ruled by the opposition PAS, will from next year receive "wang ihsan" (compassionate fund) from the federal government from the revenue from oil production outside of Kelantan waters.

Like for Terengganu, the "wang ihsan" payment for Kelantan is made after taking into consideration the state's need to develop to be at par with mainstream development and to improve the people's lot.

As Umno president, Najib took the brave step of making the party more transparent, inclusive and democratic by proposing amendments to the party's constitution.

The amendments took place six months after he took over the party presidency in an effort to stop money politics and protect the image of Umno as a Malay party that champions the lot of all communities in the country.

Among the seven amendments made at the Umno Special General Assembly held in October was abolishing the nomination quota for contesting party posts, hence making the contests open.

"I am prepared to be challenged (in the party elections) if that is what the members want," Najib had said when asked whether he was not worried about his position following the party constitution amendments.

Another firm decision made by Najib was for BN not to contest in the Penanti state seat by-election in Penang on May 31 as a matter of principle.

He felt that the seat vacancy had nothing to do with the constitutional provision but was merely the opposition's political game.

In the area of foreign relations, Najib was quick to further strengthen Malaysia's long established relations with China, Indonesia and Thailand.

China President Hu Jintao and Indonesian President Susilo Bambang Yudhoyono each paid an official visit to Malaysia in November with various forms of cooperation drawn up to enhance bilateral relations with the two countries.

In June, Najib had made an official visit to China, the first non-Asean country he visited since becoming prime minister, indicating Kuala Lumpur's strategically important relations with Beijing under Malaysia's foreign policy.

With regards to Thailand, Najib has shown strong commitment to helping to resolve the conflict in Thailand's three southern provinces of Narathiwat, Pattani and Yala.

During Najib's visit to Thailand this month for the annual consultation between the two governments, Najib and Thai Prime Minister Abhisit Vejjajiva also visited Narathiwat to meet the people there.

The visit was significant in sending a clear message that both countries want to see peace and the end of violence in the three provinces.

It's not one year yet, but in a nutshell, Najib's administration has had a remarkable start.