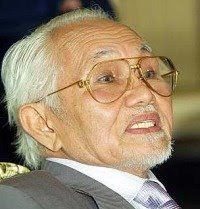 He said Sulaiman's wish to leave the federal administration was more of a personal nature as the latter was still affected by the death of his mother, Puan Sri Laila Taib, who succumbed to lung cancer on April 29.

"He was not feeling very well about six months ago so I said, well, you are the best judge for that," he told reporters after launching the Sarawak Federation of Malay Economic Bodies (Gabem) here.

Like the rest of his family members, Taib said, Sulaiman, who replaced him as the Kota Samarahan Member of Parliament after winning the seat in the 2008 general election, was "not very happy and a bit upset about his mother's recent demise".

However Taib, who is also Sarawak Barisan Nasional (BN) chairman, did not disclose whether he had discussed the matter with Prime Minister Datuk Seri Najib Tun Razak, who confirmed that he had received Sulaiman's resignation letter.

Sulaiman, a Parti Pesaka Bumiputera bersatu (PBB) Youth vice-president, was appointed to the post in the administration of then-prime minister Tun Abdullah Ahmad Badawi, and was retained by Najib in April.

Amid speculations surrounding his resignation, Tourism Minister Datuk Seri Dr Ng Yen Yen was quoted as denying that she could not see eye-to-eye with her deputy and maintaining that their relationship had been good in the seven months that they had been in the ministry.

It showed that Tokuyama had made up its mind to go all out, he said when commenting on Deputy Prime Minister Tan Sri Muhyiddin Yassin announcement's yesterday that the plant, which will produce polycrystalline silicon for solar cells, is expected to commence operations in 2011.

Muhyiddin, who is on an investment mission to Japan from Dec 7 to 10, had said that the investment by Tokuyama was approved last year and the Sarawak government had identified a location for the project.