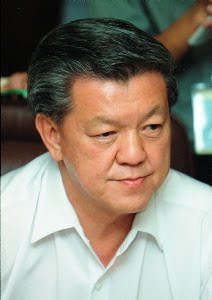 Datuk Seri Dr Chua Soi Lek remains as the MCA deputy president, according to the Registrar of Societies.

Registrar Datuk Md Alias Kalil said the ROS felt that there was no vacancy for the post as the decision on the resolution of the MCA Extraordinary General Meeting (EGM) on Oct 10 did not fulfill the requirement for a two-thirds majority as provided for under Article 35 of the MCA Constitution.

He said the ROS had sent a letter to the MCA, dated today, on the matter. Article 35 of the MCA Constitution states that only a two-thirds majority of the EGM votes can unseat a party official.

"The letter confirmed that there had been no vacancy for the post of MCA deputy president following the EGM on Oct 10 based on the Party Constitution.

"The post will only be vacant if the delegates give a two-thirds majority for the expulsion," he told Bernama when contacted, here Tuesday.

He said this when asked to comment on the claim by a member of the MCA Central Committee (CC) today that Dr Chua had been reinstated as MCA deputy president through a letter sent by the ROS.

Dr Chua also confirmed later that he had received the letter from the ROS notifying that he was still the MCA deputy president.

In August, Dr Chua was expelled from the MCA with immediate effect following the sex scandal involving him which was recorded in a DVD two years ago.

Party president Datuk Ong Tee Keat had said the MCA Presidential Council had accepted unanimously the proposal by the party's Disciplinary Committee to expel the former Health Minister as a result of the scandal.

"We follow the law and Constitution. If that is the position confirmed by the ROS, then we must accept (Chua's position)," the Deputy Prime Minister told reporters after opening the Seminar on Educational Development Under the 10th Malaysia Plan (10MP), here.