HASLINDA DIED OF A HEART ATTACK 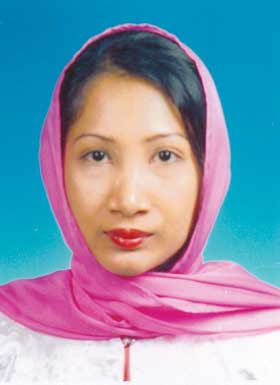 Haslinda, 37, who was single and the eldest of three siblings, died at 11.35am in the living room of the house while she having a nap on a sofa.

Her mother, Datin Rahimah Abdullah, realised that she was dead when she wanted to wake her up.

Haslinda was buried at the Hulu Klang Muslim Cemetery just before the "asar" (late afternoon) prayers.

Haslinda's younger brother, Mohd Afdan, 33, said his sister had a history of heart ailment and had been discharged three weeks ago from the National Heart Institute where she had undergone treatment for a month.

"Her heart condition was detected five years ago. Her health deteriorated over the last two weeks," he said.

The Agriculture and Agro-based Industry Minister said Haslinda had been active, hardworking and committed in carrying out her duties.

"All of us in Selangor Umno will deeply miss a committed and exemplary leader who had placed the party's interest above hers," he said.

Besides having been active in politics, Haslinda had been involved in social work.