MILITARY PERSONNEL WILL GET CRITICAL ALLOWANCE

The Defence Ministry is to seek a monthly critical allowance of RM200 for every military personnel once the country's economy has fully recovered in the near future, Deputy Defence Minister Datuk Dr Abdul Latiff Ahmad said here Friday.

"The defence minister has instructed me to initiate negotiations with the Public Service Department on the matter soon," he told reporters at the Aidiladha celebration with personnel of the 749 tactical operations command in Banding.

A similar allowance had been proposed for members of the police force in the 2010 Budget, he said.

The government would obtain feedback from field commanders and other officers as well as other ranks on the proposal, he added.

"Despite the absence of the communist terrorist threat, we are still faced with the problem of illegal immigrants and cases of smuggling of drugs and essential goods," he said, adding that sophisticated equipment was necessary to maintain border surveillance in a more organised manner. 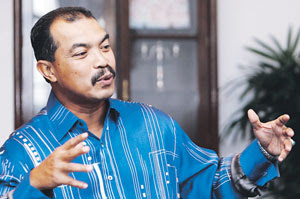