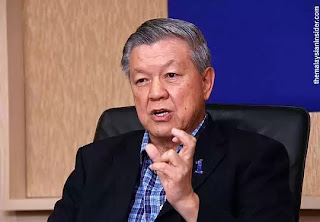 A SAILANG BATTLE FOR BEAUFORT

Monkey spotting from cruise boats along the Klias River is a popular eco-attraction in Beaufort. This sleepy farming town is also a train transit stop between Tenom and Tanjung Aru for locals and tourists seeking to catch a glimpse of the long-nosed proboscis monkey. For the next few weeks, Beaufort will wake up to a different landscape as the Barisan Nasional and opposition battle for the interior parliamentary seat in the upcoming 13th general election . In the 2008 polls, BN retained Beaufort with voters placing their trust in Lajim Ukin (photo). However, in July last year, he left Umno to be aligned with the opposition. Speculation is rife that BN will bank on former Sabah community development and consumer affairs minister and former Klias state assemblyman Azizah Mohd Dun to take on Lajim in Beaufort. 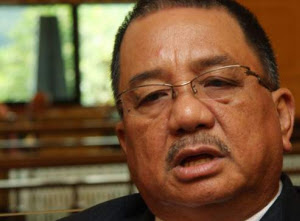 Beaufort Umno division acting head Isnin Aliasnih is tipped to contest the Klias state seat. Lajim is said to be also eyeing the Klias state seat which he held for several terms. For local voters, the battle for Beaufort is a “sailang” fight, a popular lingo here, which means “do-or-die”. Previously, both Azizah and Lajim were federal deputy housing and local government ministers. In 2008, Lajim thrashed his PKR rival Lajim Mohd Yusof with a thumping 14,780 majority for Beaufort. For Azizah, the general election is bigger than the personalities involved and the opposition would have to fight against BN’s proven track record. “We should not vote, based on the individual. We have a BN-led government with a good proven track record. The best choice for the people of Beaufort in the coming general election is the BN,” she said. Isnin is confident that the people would evalute the state’s progress achieved under Chief Minister Musa Aman, and the national transformation spearheaded by Prime Minister Najib Tun Razak. Political analysts expect the tussle for Beaufort and Klias to be interesting as both sides are confident, despite the tough times ahead. The BN has funded many development projects, especially infrastructure in the area. Najib had recently announced an allocation of RM226 million to build a water treatment plant here as part of the Beaufort new town development programme. He also approved the Islamic College Beaufort project to be undertaken jointly with the federal government, and the building of a Chinese school for the local community. Recently, Musa urged the people of Beaufort not to be influenced by the opposition. “If we look at these so-called leaders, most of them are actually recycled leaders. They have been in power before with the BN government. “If they sincerely wished to serve the people, surely they would have remained in the BN. After joining the opposition, they start promising the moon and the stars, which is basically a big lie, to gain the people’s sympathy,” he said. A freelance journalist in Beaufort said: “The reality is that it could go either way.” -Bernama
Disediakan oleh Zabidi Hj Saidi - @ 8:34 PG
Label: battle, sailang
Catatan Terbaru Catatan Lama Laman utama
Langgan: Catatan (Atom)