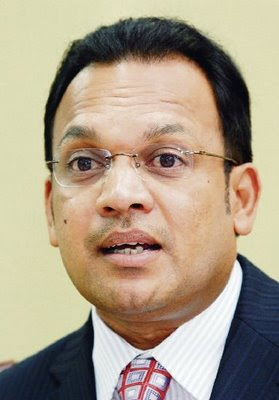 Murugiah said the calls were made by Kayveas and his supporters and they had nothing to do with the federal government.

"I am still the PPP president and I will stay on with PPP as before, now and forever," Murugiah told a news conference here today.

He said Prime Minister Datuk Seri Najib Tun Razak had never raised the PPP's internal conflict with him, and instead told him to continue with his job.

Murugiah also called on Kayveas to step down as during his seven-year presidency, he had failed to submit the party's financial statements and to convene general assembly once in 12 months.

Murugiah said Kayveas lodged a police report in Putrajaya yesterday, claiming he (Murugiah) was no longer a PPP member and described it as an attempt to hoodwink the people.

Murugiah, who was sacked from PPP on May 16 had held an emergency general meeting on May 24 and was elected PPP president by the delegates, but the Registrar of Societies (ROS) ruled that his (Murugiah's) was not valid as it did not follow the party's constitution.

The ROS declared Kayveas as the rightful president of PPP in August, since Murugiah had also claimed himself as PPP president.