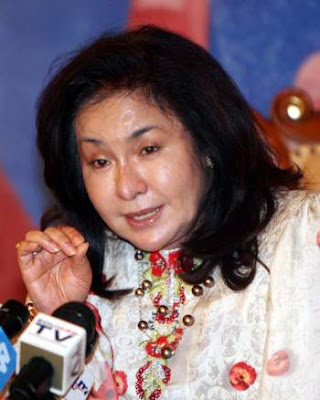 The discovery of a precious box belonging to Saudi Prince Saud Al-Saud in a cruise boat carrying the Malaysian prime minister and his family while on holiday in the south of France in August has brought good fortune to those in need in Malaysia.

The prime minister's wife Datin Seri Rosmah Mansor said feeling grateful with the find and the box safely returned to him, the prince wanted to reward her but she instead asked that the "reward" be given to Malaysians for their well-being.

"We had holidayed in the south of France on the invitation of a Kuwait prince who is a good friend of my son Riza Shahriz. While packing at the end of our cruise, I noticed the box and gave it to the boat manager."I asked him to return the box safely to its owner (Prince Saud)," she told reporters after handing over contributions amounting to US$2 million (RM7 million)to 13 organisations, here, on Friday.

Rosmah said two weeks after that, the prince thanked her for returning the box which was accidently left behind while cruising on the same boat earlier.

"The prince wanted to reward me but I told him that the best reward would be for the well-being of Malaysians in need."

He agreed to give US$1 million and I told him about the Pertama Smart School programme which needed a lot of funds for equipment and other needs. I later received news that he had agreed to give another RM1 million," she recalled.

Rosmah said she discussed the matter with Prime Minister Datuk Seri Najib Razak after receiving the cheque from Prince Saud and he (Najib) asked her to immediately make arrangements for the money to be distributed to those in need.

"I also asked an officer from the Prime Minister's Department to go the Malaysian Anti-Corruption Commission to ascertain that the contribution was "clean" so that it would not become an issue or misconstrued.

Asked about her feelings on being able to contribute to the people through an act of honesty, she said she was simply delighted to be able to respond to Najib's call of "people first".