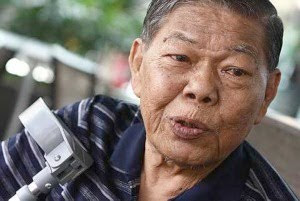 "As "Mr Propaganda", he worked alone. He was a `one-man team' and was comfortable that way", he told Bernama when contacted on Friday.

Zukri said when he was the Information Minister twice, from 1978 to 1982 and from 1987 to 1999, Mohamed had boosted the image of the government and party.

"I consider him as the Information Minister 'personified'," he said.

The former information minister and Umno secretary-general died in his sleep at his residence at Bukit Damansara, here today and was laid to rest at the Bukit Kiara Muslim Cemetery after the 'Asar' prayer.

Mohamed was supposed to celebrate his 72nd birthday on Monday.

To Zukri, out of the many nicknames given by friends and members of the public, such as Tok Mat, Mat Bulat and so on, the nickname which touched Mohamed the most was "Mat Umno", which was given him by former prime minister Tun Dr Mahathir Mohamad.

"He loved Umno very much. One day, he had once said that 'this is my second home', referring to his office on the 38th floor, Umno and BN headquarters.

Zukri also considered Mohamed as a good and charismatic boss, "a thinker, a strategist and an executor".

He said Mohamed had implemented many successful campaigns such as "Setia Bersama Rakyat" (Semarak) and the MESRA campaign which had promoted Dr Mahathir and the BN government. In fact, he had talent in writing several patriotic songs such as "SETIA" and "Sejahtera Malaysia".

"As a cabinet minister, Tok Mat had never insisted on protocol, members of the public could see him without any appointment and he would entertain them, whether in his office, parliament building or when he was enjoying his coffee break at the Equatorial Hotel (his favourite) in Kuala Lumpur," he said.

Zukri, who is now Head of Corporate Communications, Ministry of Rural and Regional Development, had known Mohamed since 1990, when he was a journalist with Bernama, The Star and The Sun before becoming Mohamed's press secretary for five years from 1995.

He described Mohamed as someone who was talkative and simple, and usually in the office, he would take 'Teh-O' and wrapped 'nasi lemak' because 'nasi lemak' reminded him of his schooling days when he used to sell cakes and 'nasi lemak'.

In addition, Zukri said Mohamed liked the song "Rindu Lukisan" which he would sing at private functions.

Among Mohamed's quotes on Umno that Zukri would always remember was "For Umno, I've done my job but people hate my guts and in the end, they respect me."

Zukri had once asked Mohamed's permission to write a book on him entitled "Yang Setia", but each time he asked, the reply was "Who wants to read about me".