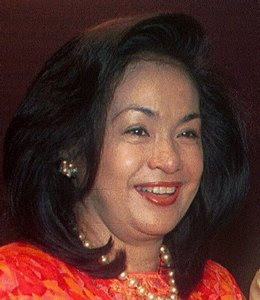 The Prime Minister's wife, Datin Seri Rosmah Mansor could not hold back her tears when a representative of gifted children presented her with a birthday card at the opening of the PERMATApintar Negara Holiday Camp, here Sunday.

Before handing her the greeting card, the student read a short speech for Rosmah, and immediately the Prime Minister's wife was seen wiping her tears, apparently touched by the speech.

The strong motherly instinct in Rosmah was also apparent when she embraced the student and kissed her on the cheek.

Rosmah, who will celebrate her birthday on Thursday (Dec 10), was also presented with a cake which she cut together with several student representatives.

The guests later burst into laughter when Prime Minister Datuk Seri Najib Tun Razak took a piece of the cake and fed it to his wife after which, Rosmah returned the gesture.

Besides the cake and birthday card, Rosmah, who is the patron of PERMATA Negara, was also presented with a bouquet of flowers.