KL DID NOT BRAINWASH SABAHANS 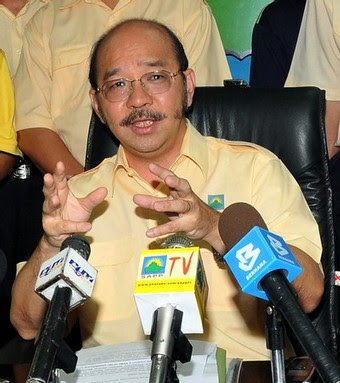 Tan Sri Muhyiddin Yassin has denied the allegation by Sabah Progressive Party (SAPP) president Datuk Yong Teck Lee that the federal government is following the footsteps of the British colonialists who had previously taken the opportunity to brainwash the minds of the Sabahans.

On the contrary, the Deputy Prime Minister said that the federal government had always been fair and committed in developing Sabah to be on par with the other states in terms of development.

"We will not ignore any state in the country. We will continue to champion the cause of the people regardless of race and religion, including in Sabah and Sarawak.

"It looks like he is out of date and he is out of touch on the latest developments," he said in his speech at a gathering of 'The People With The Leader' at the Dewan Sri Libaran, near here on Wednesday.

In his speech at the opening of the annual general meeting of the SAPP Putatan and Petagas 1 divisions near Kota Kinabalu city yesterday, the former Sabah chief minister had said that Kuala Lumpur was brainwashing the people of Sabah to the extent that the Sabahans considered themselves as less capable "although they actually can do anything".

Yong claimed that Kuala Lumpur had been doing this for a long time so that it could exploit Sabah's mineral resources and this had resulted in Sabah becoming poorer while the people were deprived of the various opportunities including positions in the federal service in the state.

Muhyiddin said the federal government had given a fair allocation to Sabah and Sarawak particularly in developing the rural areas.

"Actually Sabah has substantial reserves (in terms of finance) and under (Chief Minister) Datuk Seri Musa Aman, who has managed the economy wisely, the state administration has been placed on the right footing," he said.

In this context, the Deputy Prime Minister wanted the Barisan Nasional (BN) component parties, especially in Sabah, to continue to maintain cooperation and reach an understanding.

"We want our party to be strong and solid...no squabbles and no problem. There are some parties in BN which are now facing problems that may have a negative effect to us and the rakyat.

"That's why proactive measures must be taken to resolve the problems immediately," he said.

"That's why we must maintain a strong Sabah government. The Prime Minister (Datuk Seri Najib Tun Razak) and I will always watch and give special attention to what is needed by the state especially in terms of development," he said.

He also expressed confidence on a better national economic growth next year and stressed on the need for the people to understand the objectives of the 1Malaysia concept mooted by the Prime Minister.

Muhyiddin, who was accompanied by Musa, later visited the site for the education hub for the Sabah east coast measuring 542.36 hectares at km16, Jalan Labuk in Sungai Batang, located in the Sibuga state constituency.