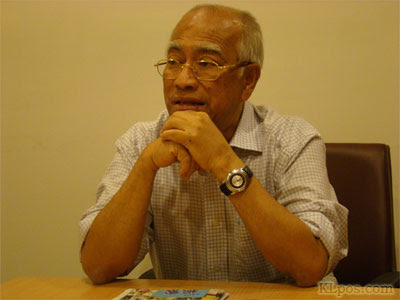 Reading the entertainment page 17 of THE SUN on 28th October, 2010 whereby close associates and the son of P. Ramlee, Sazali, commented on our legendary hero, I rang up Rocky Bru of the Malay Mail, as I do not know of anybody in The Sun, as to how I can contribute by writing something of my friend P. Ramlee which I have not seen being mentioned anywhere in write-ups about him that I have come across so far.

One of his closest close friend is my uncle Sasterawan Negara Dato' Abdullah Husein who was working in Singapore at about the same time as P. Ramlee.

It was when P. Ramlee was in Gombak that I came closer to him. Together with Dato' Abdullah Husein and Encik Zain of Filem Negara, at that time, we formed a company SAZARA SDN. BHD., SAZARA; being the acronym for Sanusi, Zain, Ramlee and Abdullah. Except for Zain who did not originate from Aceh all the other three of us were of Achehnese origin.

The objective of forming the company was to produce films which will motivate the people into being more courageous and persistent in facing life. We were then inspired by the film 'The One Arm Swordsman' acted, directed and produced at the Shaw Bros. Studio in Hong Kong by the martial art expert Jimmy Wang Yu. In this film it was portrayed that a courageous, determined and persistent individual can achieve wonders despite all odds, in this case Wang Yu was with only one arm.

Dato' Abdullah Husein, being an author, has written a few scripts for Sazara's production. P. Ramlee was already rehearsing and Zain the photographer was anxious to shoot. It was my responsibility as a bank officer to find the money.

This was in the early 70s when I was just promoted to the post of Manager for Bumiputra and Rural Loans at the Chartered Bank, Kuala Lumpur. ( The Bank became The Chartered Standard Bank after I left my post to join the government). At this time I was involved in discussions organized by Bank Negara Malaysia which was trying to form a credit guarantee mechanism to guarantee all 'small loans' given by the banks without the borrowers having any collateral to offer. The credit guarantee institution was to be owned by BNM and all the commercial banks with around 2600 branches in the country.

As the loans to be guaranteed by the body which was eventually named CGC or Credit Guarantee Corporation there was a long debate in more than one meetings as to what was to be construed as 'small loans'. During one of Sazara's board meeting I asked P. Ramlee as to the amount he needed for each film that were about to produce. He mentioned RM30,000-00 would be sufficient for one film as we were only producing video film and not the type for cinemascope. It was at this time that P. Ramlee predicted that cinema halls or PAWAGAM as it was then, was coming to an end. The future he said was videos. In fact pawagam is a word coined by P. Ramlee as acronym for 'Panggung Wayang Gambar'.

As I was an employee of a bank I had to declare my interest to my employer the Chartered Bank. When I mentioned my involvement in Sazara to the Chief General Manager of The Chartered Bank, Charles MacCulloch he approved my involvement and was fascinated by the idea of a Wang Yu type of films for what he describe as 'the passive Malay community'. When I mentioned to Charles MacCulloch of the amount it costs to make each video film he suggested that I recommend RM30,000-00, that P. Ramlee gave as the cost for each film as the amount that can be defined as being in a class of small loans. Charles MacCulloch mentioned this figure at his meeting with the Governor of Bank Negara Malaysia Tun Dr. Ismail (at that time a Tan Sri) and I mentioned the amount in the next forum on 'small loans' among top bank officials. That was the reason that CGC limited an amount for small loans at RM30,000-00 when it first started. Most foreign bank managers would prefer bigger amounts as it would cost the same amount to manage either small loans or bigger loans. Banks prefer lending more money to lesser number of borrowers.

Just as we were about to shoot our first film our friend Tan Sri Jins Shamsuddin, another Acehnese, came to us after having graduated with a degree in film making. It was Tan Sri Jins Shamsuddin who influenced P. Ramlee into wanting to make 'cinema-scope like films' as he said Malay films should be of inferior quality. Of course Jins was not aware of our earlier views on Pawagam and videos. I was not at this meeting with Jins. When I came back from Jakarta I met Dato' Abdullah whom I found was supportive of Jins Shamsuddin's idea of a cinemascope type of films. As I was unable to finance such million dollar films under the CGC we had to find other sources of funds.

It turned out that during my absence in Jakarta a Jakarta film producer, who is also Acehnese, Teuku Turino Junaidi, had a meeting with the Sazara board of directors. Knowing Sazara's difficulty in raising the funds needed for the production of cinemascope type of film Turino offered Sazara the opportunity for the company to be the distributor of his films beginning with the romantic film 'KABUT BULAN MADU'. It was at this time that I was informed by phone, while I was still in Jakarta of the distribution right for Turino's film. Upon overhearing the name Turino my future father-in-law, who was one of the commandants of the Mujahidin army in the guerrilla war in Aceh in the 60s, which the likes of Turino were not supportive, advised me to have nothing to do with Turino. There ended my business relationship with Sazara although I remained close to both P. Ramlee and Dato' Abdullah Husein.

To me P. Ramlee is a great, generous, kind-hearted man and a loyal friend. He teaches the public through humor and entertainment. He used to say that human beings are sensitive to criticisms and that the best way to teach them is through humor. In Malaysia, where every known personality is not free from criticisms P. Ramlee stands alone as the only hero who is loved by all. Had he been singing in English he would have been in the same league as Elvis Presley and Michael Jackson.

He is the only unblemished hero to all Malaysians. He is a 1Malaysia hero.